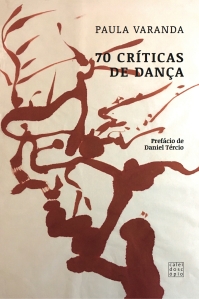 This book brings together Paula Varanda’s work as a critic for the newspaper Público between 2004 and 2016. 70 dance reviews is a personal and professional testimony of 70 contemporary dance works presented in Portugal. The works ,and the reviews, mirror, count, retell, observe or comment on the time, the space and the places, the relationships between people, fictions and realities and the state of the art. The former write poetically, with the body on stage; the latter leave in words the trail of a theatrical and ephemeral dance – what happened there? Criticism is the result of a meeting between the public and the artwork. Criticism also makes choices; about what you write, how you write, and what you underline or omit. In this collection the works of authors such as Anne Theresa de Keersmaeker, Alain Platel, Clara Andermatt, Emmanuelle Huynh, Joseph Nadj, Madalena Victorino, Paul Ribeiro, Rui Horta, Trisha Brown and Vera Mantero, among many others, were organized under themes that the artistic production in this early century expresses: the relationship between music and dance, revisiting the classics, solos, politics, societies and cultures, languages, complicities and ecology.An introduction text provides considerations about the possibilities of criticism, namely in contributing to a history of this arte of the body – in its contemporary theatrical form – and in particular to the history of dance’s culture in Portugal.

This entry was posted in Uncategorized and tagged criticism, dance, PÚBLICO, performance. Bookmark the permalink.

This site uses Akismet to reduce spam. Learn how your comment data is processed.